The 57 Bus by Dashka Slater: Five Reasons you should read The 57 Bus

I don’t typically read a lot of nonfiction, but I was blown away by The 57 Bus, which I stumbled onto by accident. I’m part of a book club and this Christmas, we played some book exchange game where everyone brought a book and we traded and what not. The 57 Bus was hands down the book that everyone was fighting over, the premise is that compelling. I didn’t go home with the book that night, by the way. It was stolen right out of my hands. But they let me borrow it and I read it and wow! I have thought about, talked about, and recommended this book a lot since reading it. 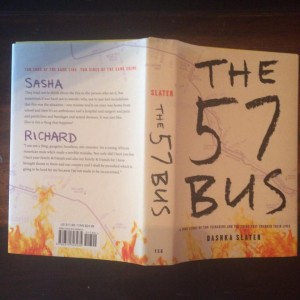 The 57 Bus is narrative nonfiction that tells the true story of an agender teen, Sasha, who rode the 57 bus home every day. One day, on that bus, three teen boys are being obnoxious jerks and Richard takes a lighter to Sasha’s skirts and seems surprised when it goes up in flames. The remainder of the story discusses Sasha’s recovery and the court case surrounding Richard. It’s a remarkable story about identity, choices, consequences and, in the end, forgiveness.

In the midst, there are a lot of informational tidbits thrown in that I think everyone who values, raises, or works with teens should read.

Sasha does not identify as male or female and considers themselves to be agender. Sasha’s preferred pronouns are they/them. I am not going to lie, I what my friend calls “an old” AND I come from a conservative Christian background, so trying to think differently about the gender binary is challenging. And although I have teens and adult friends that identify as asexual or aromantic, I continue to grapple with what these terms mean and put them into context into what I thought I knew about the world and the people who populate it. The 57 Bus has one of the best, most straightforward discussions about what various terms on the GLBTQ spectrum mean. In addition, seeing how Sasha’s parents and the community respond to Sasha is a very educational experience. In my library, we have a lot of teens who identify as being on the GLBTQAI+ spectrum and this discussion is helpful in understanding what those various labels mean. 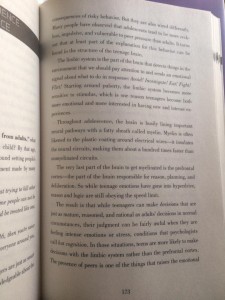 Part of my job is knowing and understanding adolescent development. One thing we know is that the teen brain is very different from the adult brain. Teens don’t make the same decisions that adults would make because their brains are literally wired different. The 57 Bus has one of the best discussions of those differences and what that means that I have ever read. If you work with teens, you need to read this chapter alone just to help get a deeper understanding of why teens think and act differently, and why they make decisions that make absolutely no sense to adults. Teens are not mini-adults, and understanding the teenage brain is imperative in being able to serve them.

It is no secret that the United States has one of the highest rates of incarceration in the world. At a previous library I worked there was a local juvenile detention center and I worked with that detention center in various ways to provide services and materials to those teens. The 57 Busreally challenges the idea of trying teens as adults given what we know about the adolescent brain. It posits the question: given what we know about the development of the teenage brain, can we justify trying teenagers for their crimes as adults?

Throughout the story of The 57 Bus is a discussion about forgiveness and reconciliation. Sasha’s family is approached by a group that wants to lead them through the reconciliation process with Richard. Richard himself writes several letters to Sasha asking for forgiveness. In the end, Sasha’s family chooses to speak on Richard’s behalf, despite the overwhelming pain and suffering that Sasha has undergone. Even if you don’t agree with the ideas presented, it’s an interesting point of view to sit with.

The 57 Bus is now an award-winning book, having won a Stonewall Book Award at the 2018 Youth Media Awards recently announced. It was also honored with a YALSA AWARD FOR EXCELLENCE IN NONFICTION FOR YOUNG ADULTS. It deserves these awards, it’s that good.

The 57 Bus also features teachers being awesome, a look at complex family dynamics, friendship and more. The teens in this story also create their own game which is one of my favorite things ever. I just highly recommend this book.